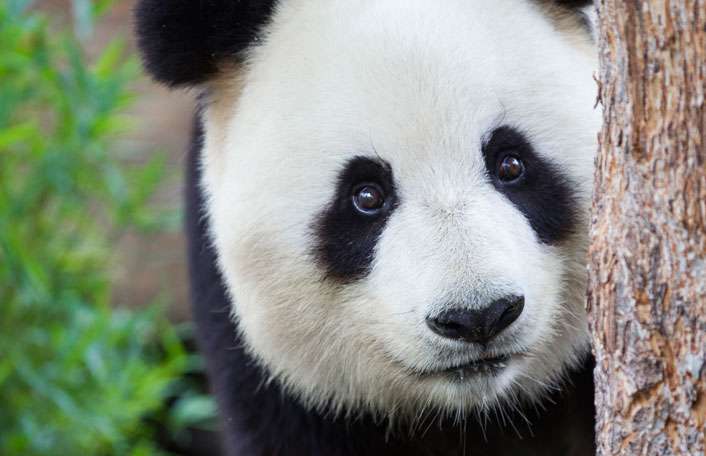 As the temperature across Adelaide begins to rise, so too have Giant Panda Fu Ni’s hormone levels, marking the official start to the 2015 Adelaide Zoo Giant Panda breeding season.

Giant Panda reproductive specialist Professor Tang of the China Conservation and Research Centre for the Giant Panda at Wolong is on route to Adelaide to help support breeding season activities.

Over the coming days, Zoo staff and Professor Tang will be supported by reproductive fertility scientists who will analyse daily urine samples to determine the peak of Fu Ni’s oestrous cycle.

“Both Wang Wang and Fu Ni’s activity levels have increased – Wang Wang is showing prolonged rutting behaviours (power-walking to build strength and energy) and scent marking, while Fu Ni’s scent marking has increased from one or two a day to 50-100+, and she’s also climbing trees and splashing in her water bowl,” Lucy said

“The building has also come alive with panda chatter – Fu Ni has been chirping and bleating away, even when Wang Wang is not around, while Wang Wang has started his first bleats of the season.

“These vocalisations, used between pandas in the lead up to the breeding season, will continue to increase over the coming days before the building becomes eerily quiet just prior to ovulation.”

“A cytopathology laboratory at Healthscope stains vaginal smears, similar to pap smears, which confirm on a cellular level what zoo keepers are observing behaviourally. Microscopic changes in cell colouration, blue to pink, and cell structure give us an early warning sign that ovulation is likely to occur within 5-15 days,” David said.

“At this point, reproductive specialists at Repromed step in to help pinpoint the exact time of ovulation through analysing urine samples. As soon as we see a significant decrease in Fu Ni’s levels of oestrogen and an increase in progesterone levels, we’ll know that she’s ovulating and introductions between the pair will begin.

“As Fu Ni has an extremely short window of fertility, lasting approximately 36 hours a year, this team effort is absolutely critical so that we don’t miss this opportunity.”

Adelaide Zoo staff were very pleased with the natural breeding behaviours both pandas displayed last year, which puts the zoo in good stead for the upcoming breeding season.

“We were extremely pleased with the positive behaviours we observed last year, in particular the dominant male behaviours Wang Wang displayed. These advancements, coupled with more experience and maturity will greatly increase the likelihood of a natural mating this year,” Lucy said

“A natural mating is our preferred option for breeding pandas, however we’re prepared to utilise artificial insemination should a successful mating not occur. This procedure has played an important role in the captive breeding of Giant Pandas around the world due to the species’ unique reproductive biology.”

Adelaide Zoo Vets have confirmed the microscopic change in cell colouration, blue to pink, and cell structure. Fu Ni’s hormones levels are currently slowly on the rise and will be monitored daily. Once her oestrogen levels decrease and progesterone levels increase, the team will know that she is ovulating and introductions between the pair will begin.

Adelaide Zoo will provide updates here and on its Facebook page and Twitter page using the hash tag #ADLpandas.