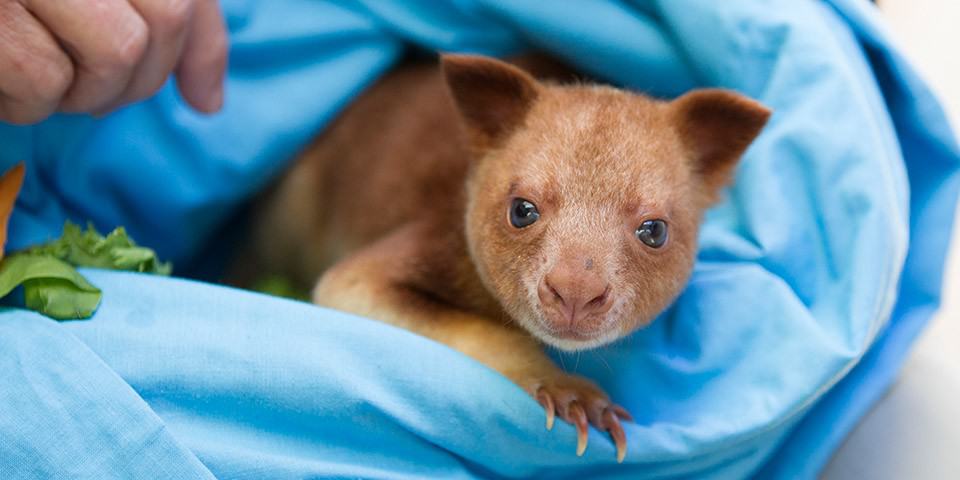 In a world first for conservation, Adelaide Zoo Keepers and Veterinarians saved the life of an orphaned Goodfellow’s Tree Kangaroo through utilising a surrogate wallaby mother – a technique never attempted before with a tree kangaroo.

Today, the joey will make its public debut as his amazing story features in the July/August edition of Australian Geographic, available on newsstands Friday 3 July.

Acting on pure adrenalin, zoo keepers made the decision to try and save the tiny joey. Due to the young age of the joey, hand rearing was not possible, which meant the only option available was to try and ‘cross-foster’ the joey into the pouch of a surrogate wallaby mother.

‘Cross-fostering’, a special breeding technique that Adelaide Zoo began pioneering in the 1990s, involves the transfer of endangered joeys to the pouch of a surrogate mother of a different wallaby species. This accelerates the breeding cycle of the original wallaby, allowing the female to increase its reproduction rate up to six or eight times in some species. This means Adelaide Zoo can build the captive population of an endangered species much more quickly.

“We’ve had great success over the years’ cross-fostering between wallaby species, but the specialised breeding technique has never been used on a tree kangaroo,” David said.

“Not only are tree kangaroos distant relatives of wallabies, they also have many behavioural and physical differences. We had no idea if the yellow-foot would accept the tree kangaroo joey, but if we wanted to save the joey we had to try our luck.”

The cross-foster procedure, to get the tree kangaroo joey to latch on to the new teat, ran smoothly and an anxious couple of days followed as zoo keepers closely monitored the wallaby to determine if the attempt was successful.

Adelaide Zoo Team Leader of Natives, Gayl Males, says tiny ripples of movement over the following days confirmed the joey was alive and thriving, tucked carefully away in its surrogate mother’s pouch.

“We were so excited when we confirmed the joey had made it past the first critical 24 hour period. We were uncertain as to whether the joey was going to be accepted. This joey was completely different from other joeys in body shape and behaviour – it certainly wriggled around more than a wallaby joey!” Gayl said.

“The joey, which we named Makaia, first popped its head out of the pouch around the end of January. It was certainly a sight to see a tree kangaroo joey, with its reddish-tan fur, bright blue eyes and long claws riding around in a wallaby!

“He stayed with his wallaby mum for about three and half months until I took over caring for him and in effect became his third mum – He’s certainly a cheeky little fellow and loves running amok, testing the boundaries using my home as his personal playground, climbing on everything, pulling toilet paper off the rolls, but he also loves quiet time cuddling with my husband in the evening while we watch TV.

“He truly is a special little guy and I am so pleased that Adelaide Zoo has the staff and expertise to successfully perform this world first cross-foster. Makaia is the result of all our hard work – we can’t wait to share his amazing story with the world!”

Makaia spends the day at the zoo and goes home with Gayl over evenings and on her days off. He will continue to be cared for full-time until he no longer requires overnight feeds and will be weaned at around 15-18 months old.

Adelaide Zoo will share its findings with other zoos around the world to help guide breeding efforts for endangered tree kangaroo species and increase the success of internationally coordinated captive-breeding programs.

To contribute to Zoos SA conservation efforts, make a donation and support the breeding of more endangered wallabies, including the Mainland Tammar Wallaby, over the next 12 months. Donations of $2 and above are tax deductible.