So you want to be a zoo keeper? 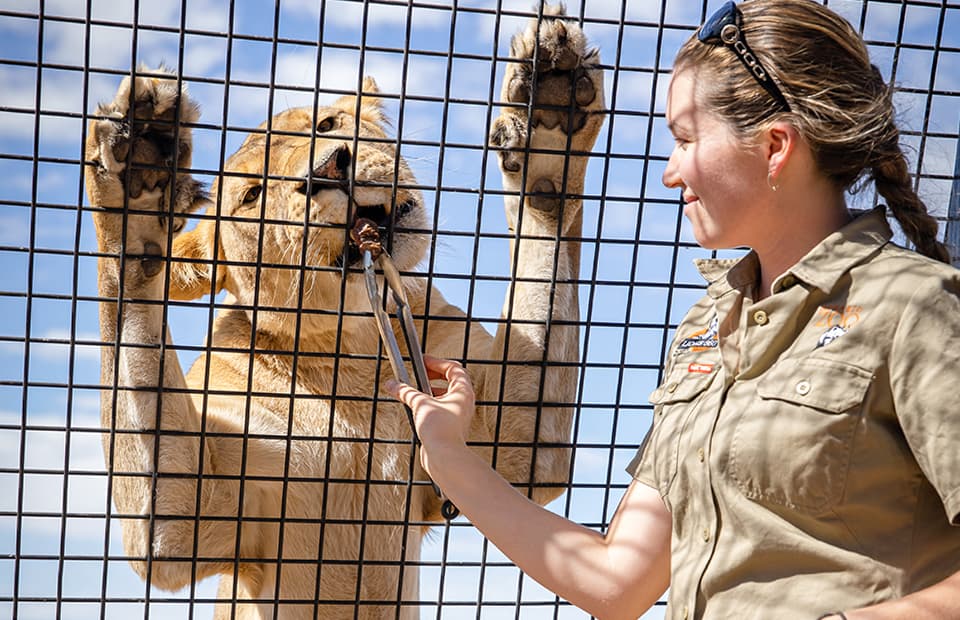 So you want to be a zoo keeper?

What qualifications and experience do you need to become a zoo keeper? It’s a question we are regularly asked and quite rightly so! Who wouldn’t want to work with animals ranging from lions and tigers to tamarin and snakes and, importantly, help save them from extinction? However, the path to a career as a zoo keeper isn’t as straightforward and set in stone as say, becoming a vet. And, while experience and qualifications are useful, they aren’t the only determiners; there’s personality, aptitude and determination to consider too.

To give you an idea of how our wonderful keepers found their way to working with Zoos SA’s animals and in celebration of International Zookeeper Day (4th October annually), we asked our keepers from Monarto Safari Park and Adelaide Zoo how they got to where they are today.

As Director of Life Sciences for Zoos SA, Dr Phil Ainsley has never worked as a zoo keeper per se, but has a wealth of experience working within the animal and conservation arena. His career trajectory is certainly food for thought.

Phil’s father was a curator at Adelaide Zoo in the 1980s so their dinner table chats must have planted a seed! However, before working at the zoo, Phil worked as a bio-engineer, ecologist and restoration ecologist. When he first came to Zoos SA he worked as the conservation program manager. His role progressed to curator and eventually to his role today as Director of Life Sciences. In this role, Phil manages curators, veterinarians, presentations teams, species management and record officers.

Sarah began with external study (animal attending) then studied an Animal Tech Diploma at TAFE SA.  As part of her diploma, Sarah undertook work experience at both Adelaide Zoo and Monarto Safari Park.

Sarah’s story is very much one of perseverance, as her eagerness to work meant that she eventually gained casual weekend work initially with the natives at Monarto Safari Park. Over time, she gained more experience and eventually landed a job as a full time keeper.

At High School Tammy wanted to be a zoo keeper but was constantly told by her school’s careers advisor that jobs for keepers were too scarce.

After leaving school Tammy did a degree in Nature Resource Management then started work with National Parks including a stint working on Kangaroo Island to monitor koalas and bandicoots.

Tammy then worked as a lab assistant at an IVF laboratory for cows and sheep until she saw a job advertised at the zoo.

If you ever doubted whether perseverance pays, take heed. A very determined Tammy applied for 25 positions before she landed her permanent job at Adelaide Zoo!

When Jon was at school he began volunteering at a veterinary hospital and gained some small animal attending certificates. Upon leaving, he completed a TAFE Diploma in Applied Science.

Jon had a few non-zoo keeping related jobs, including working for Telstra, before working at Darwin’s Crocodylus. This started on a temporary basis but eventually lead to permanent work. He stayed at Crocodylus for three years.

Jon moved to SA when he saw a job advertised for a carnivore keeper at Monarto Safari Park. During his time at Monarto he has worked with a range of animals but is now back to where he began, working with carnivores, however, this time as a senior keeper.

Arliah always knew she wanted to work with animals in either a research or hands-on capacity. She went to Uni and studied marine biology before working as a casual at Toronga Zoo. She then moved to Adelaide Zoo and started working with the sea lions and now trains a wide range of animals.

Kat studied for a Bachelor of Science with a major in wildlife and was also a volunteer at the zoo, working as a tour guide.  When she was at TAFE she did a week’s work experience at Adelaide Zoo and at the end of her week asked the then curator for a job. It worked!

Kat primarily works on the ungulate rounds including giraffe, hippopotamus, pygmy hippo, tapirs, capybara, mara, meerkats, otters but also gets to occasionally work with sea lions, maned wolf, meerkats pandas, red pandas, white cheek gibbons, siamangs, hyenas, tamarins, marmosets and dusky langurs. She’s also worked as a safety second and assisted the big cat keeper and orangutan keeper, as well as taking care of the fennec foxes, coatis and the binturong. She has led experiences, working with the ring tailed lemurs and squirrel monkeys and in the children’s zoo.

Jade has always wanted to be a zoo keeper but it took persistence, hard work and a lot of disappointment along the way but she never gave up.

Jade did spells of work experience with Fauna Rescue, Adelaide Zoo, Earth for Orangutans and the Animal Welfare League, where she learnt the importance of great customer service skills, animal knowledge and how to adapt quickly around animals.

Jade has a Certificate 1 and 3 in animal studies, a Certificate 3 in companion animal services with the Delta Society (dog training and positive reinforcement) plus lots of workshops and conferences under her belt. She is a firm believer in gaining as much learning and experience as possible. For instance, she traveled to Sumatra where she raised money to help build a haven for sick or injured orangutans.

Although Uni or formal qualifications help, Jade believes that it was her experience with animals, her initiative to learn, volunteering and her work ethic that helped her land her dream role.  Jade started working at Adelaide Zoo in January 2019 and looks after kangaroos, wallabies, Tasmanian devil, emu, koalas, potaroos and one beautiful echidna but has recently started looking after the Nile hippo, pigmy hippo, otters and meerkats.

To be a great zoo keeper Jade says you need to be understanding and hard working, show compassion towards people and animals and have good observation skills. Jade’s one piece of advice is to work hard and never give up, if you have a dream… chase it!

Finally, she says “Do your research, make sure it is something you want to do.

“Zoo keeping isn’t for everyone, yes we work with amazing animals, but there’s also a lot of cleaning to do too!”

Anna Bennett, Assistant Curator and Keeper, Monarto Safari Park Carnivores and Ungulates at Monarto Safari Park, says, “A lot comes down to experience but we also look at a good culture fit. This means we like to find out about an applicant’s morals and how they’ll fit in with the rest of the team.

“While it’s easy for a person to appear enthusiastic, keen and motivated actually demonstrating these are key,” said Anna.

Heather Guy, Assistant Curator Team Leader of Herbivores and Ungulates agrees with Anna. “There’s a lot to be said for a good dose of common sense, a practical hands on approach, and the capacity to work in a team (on all levels).

“I often find that a person’s passion for working in the animal industry is reflected in their CV and when you scan through their job history and volunteer work it’s easy to see the animal component. Having said that, we have seen some good keepers come through when they have had a career direction change later in life.

“Importantly, it’s not just about a passionate approach, but about a respectful approach.  I am looking for what they can offer, not necessarily about what the person will gain,” said Heather.

The final word goes to keeper, Kat Moore, “You need to be an extremely hard worker who is prepared to get dirty and do the hard stuff.

“Patience, a strong work ethic and the ability to puzzle things through on your own are key. Anyone wanting to be a zoo keeper needs to realise it’s not glamorous or about playing with animals; in fact, at times it can be dangerous and sometimes even heartbreaking.

“It’s hard, heavy, dirty, hot and sweaty, or freezing cold and raining. However, it’s also extremely rewarding and the best job in the world!” Said Kat.

Want to find out more about becoming a keeper, qualifications and more? Take a look here