Adelaide Zoo and Monarto Safari are now open again! Here’s what you need to know for your next visit. Find out more 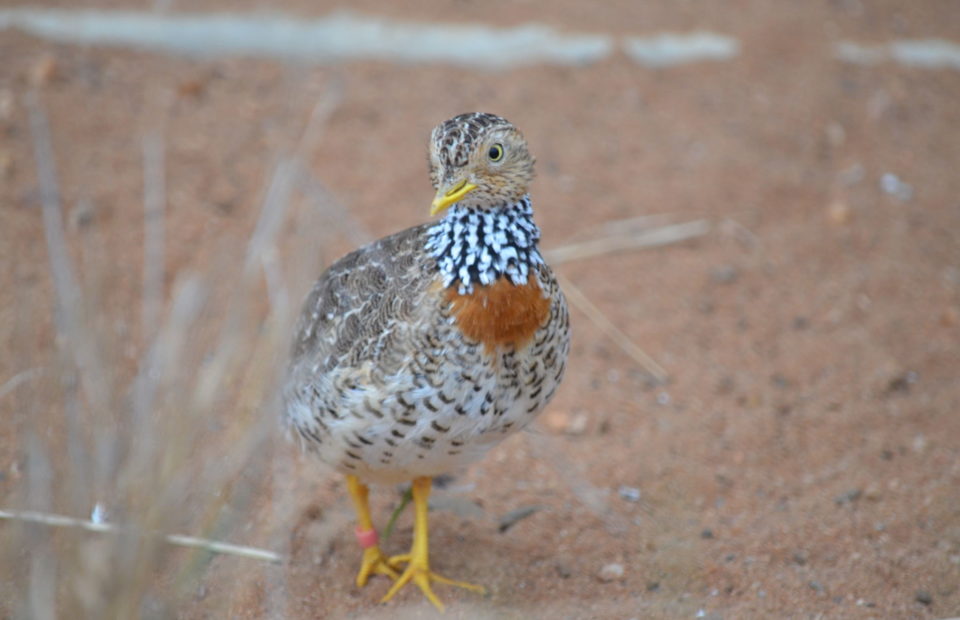 The Plains Wanderer birds are listed in first position among Australian birds in the EDGE (Evolutionary Distinct and Globally Endangered) list – compiled of species with a significant amount of unique evolutionary history that face extinction.

The six birds moved to Monarto Safari Park in March this year as part of a national conservation breeding program that aims to save the species from extinction. The birds have recently come out of their quarantine period and are settling into their new, purpose-bred facility at Monarto Safari Park.

Zoos SA is currently working with the Recovery Team to bring more birds to the facility.

“National Threatened Species Day is all about raising awareness of the species that are under threat of extinction. It is also an opportunity to celebrate the conservation work that is taking place, such as the Plains Wanderer conservation breeding program,” said Dr Liberty Olds, Zoos SA’s Conservation Manager.

“Without conservation breeding programs like this, the future for the Plains-wanderer would be bleak. At present there are thought to be less than 1,000 adult birds remaining in the wild.

“The Plains-wanderer is an ancient and uniquely classified species and the only member of the Pedionomidae family. Considering its evolutionary distinctiveness it is definitely one Australian bird species that we can least afford to lose.

“Zoos SA is passionate about being part of this vital conservation program and helping to save the Plains-wanderer from extinction.

The Plains-wanderer conservation breeding program is one of the key strategies of the National Recovery Plan, which will see the eventual reintroduction of captive-bred birds into wild populations and assist with the recovery of the species.

The Plains-wanderer, Pedionomus torquatus, are most similar to a small quail. A female can breed all year round, laying 2 – 5 eggs with 2 – 4 chicks most commonly hatched. Once her eggs are laid, the female ‘wanders off’ to mate again. Like emus, it is the male who rears the chicks with the young remaining with him until they are approximately two months of age.

Once commonly found in grassy areas stretching as far as from South Queensland to South Australia, the Plains-wanderer has rapidly fallen victim to the clearing of their preferred native grassland habitat, persistent drought and overgrazing particularly drought times.

“After the positive successes of the captive breeding program to date, which has seen the successful breeding of the species at Taronga’s Sydney and Western Plains Zoo’s as well as the Werribee Open Range Zoo, the transfer of six captive-bred Plains-wanderer to Monarto Safari Park’s brand new Plains-wanderer facility sees another significant milestone in the Plains-wanderer conservation program being reached”  said David Parker, NSW Senior Threatened Species Officer and Chair of the National Plains-wanderer Recovery Program.

National Threatened Species Day is commemorated across Australia on 7 September each year. The day aims to raise awareness of native plants and animals that are at risk of extinction.

The day originated in 1996 to mark the 60th anniversary of the death of the last remaining Tasmanian tiger in Hobart Zoo in 1936.

Over the last two hundred years it is believed that more than 100 species of plants and animals have become extinct with thousands of others at the risk of extinction.

National Threatened Species aims to highlight species under threat, to raise awareness of how we can best protect these and other species in the future and to celebrate the amazing conservation work that is taking place across the country.