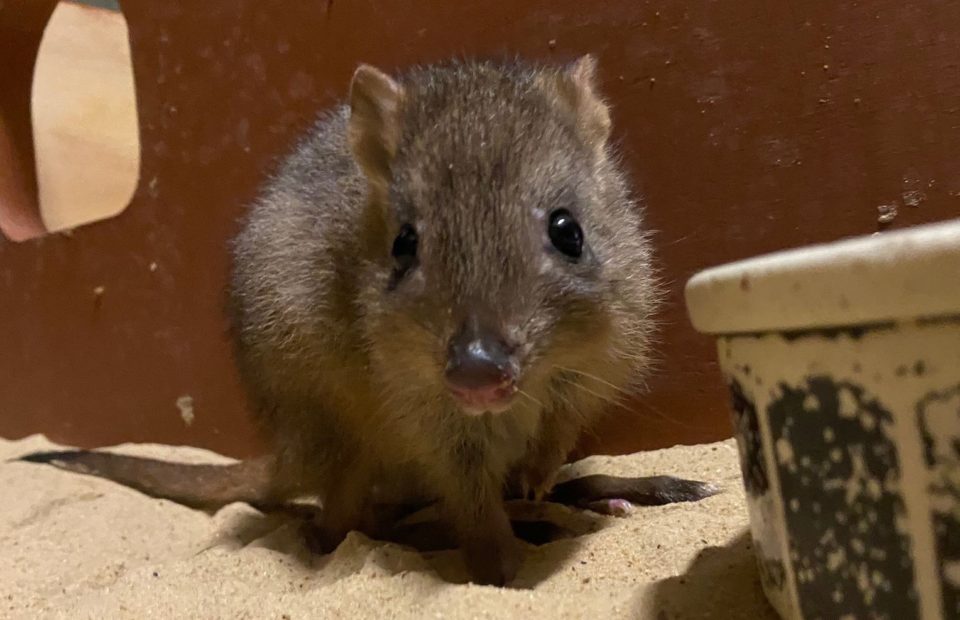 An adorable bettong joey has bounced his way into the hearts of Adelaide Zoo keepers and brought hope for his critically-endangered species.

Keepers were delighted to spot the little Brush-tailed Bettong in the pouch of five-year-old Truffles last month.

Now three months old, the male joey is the offspring of 13-year-old Rambo, who has become well-known around South Australia as an ambassador for native animals, rewilding, and the conservation of his species.

Numbers of Brush-tailed Bettongs, also known as Woylie, are decreasing rapidly in the wild.

According to the IUCN, there are only around 12,000-18,000 individuals remaining in Western Australia with the species locally extinct in South Australia.

Senior Keeper of Natives, Michelle Birkett, said that was why it was such wonderful news to welcome a joey of such a critically-endangered species.

“We are so thrilled that Truffles and Rambo have had a joey,” she said.

“We hope the little one can follow in his dad’s paw-steps and act as an ambassador for his species.

“It is so important for people to be able to learn not only about Brush-tailed Bettongs, but also the challenges that many of our native species face in the wild, including feral predators and habitat destruction.”

This year Zoos SA will lead a second translocation of Brush-tailed Bettongs as part of the Marna Banggara rewilding project.

Across two weeks, bettongs from Western Australia’s Tone-Perup Nature Reserve and another cohort from Wedge Island in South Australia will be reintroduced to the southern Yorke Peninsula.

Marna Banggara is the biggest rewilding project in Australia and will see locally-extinct species returned to a fenced 170,000 hectare wildlife reserve.

The project is jointly funded through the Northern and Yorke Landscape Board, the Australian Government’s National Landcare Program, the South Australian Department for Environment and Water, WWF Australia, and Foundation for National Parks & Wildlife, in partnership with the Narungga Nation Aboriginal Corporation.

Nicknamed ‘soil engineers’, Brush-tailed Bettongs play an essential role in keeping their habitats sustainable by digging up to four tonnes of dirt and leaf litter per year, spreading the seeds of native plants around the area in the process.

The reintroduction of bettongs to the southern Yorke Peninsula will help restore ecosystem health and create a better  environment for plants and other local wildlife.

The little joey is yet to be named and currently housed behind the scenes at Adelaide Zoo.

However, you might sneak a peek of him and Truffles during the Night Creatures Wildshow at this year’s Light Creatures event as part of Illuminate Adelaide with presenting partner SA Power Networks.

Spare change rattling around in your back pocket? Card need dusting off? Donate to our Winter Warmers appeal and he… https://t.co/nQoBe3iXZf