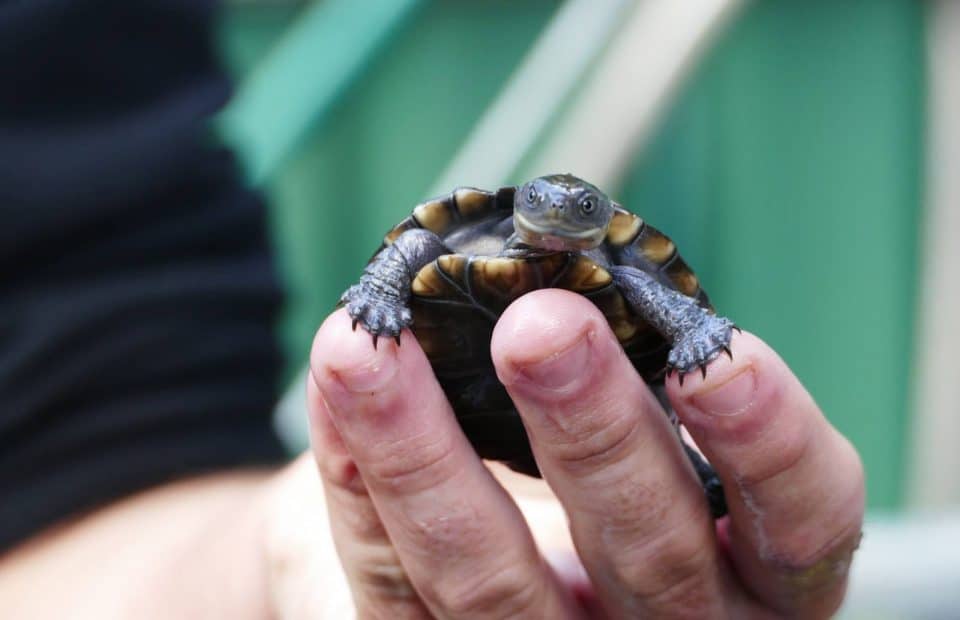 The hatchlings – measuring smaller than a 50 cent coin and weighing in at only 30 to 60 grams – are one of Australia’s rarest reptile species.

While just small and adorable, these little hatchlings represent a huge contribution to the future of the Western Swamp Tortoise in the wild.

Adelaide Zoo Senior Bird and Reptile Keeper Chad Crittle said this season’s breeding success was a real cause for celebration, but also an important reminder for the plight of the species in the wild.

“Sadly, the numbers of Western Swamp Tortoises in the wild are still extremely low as the species face a number of threats to their habitats and predation from introduced animals,” Chad said.

“These nine hatched earlier in the year through Zoos SA’s involvement in the captive breeding program for the Western Swamp Tortoise.

“We are very proud to be working with Perth Zoo as one of only two institutions in the world breeding this special species.

“Zoos SA has so far successfully raised more than 30 Western Swamp Tortoises, with eleven of these returned to Perth Zoo for inclusion in the wild release program.

“We are determined to continue to grow an insurance population for this beautiful species to ensure they have a long future in the wild.”

Endemic to Western Australia, this critically-endangered reptile faces serious trouble in the wild.

For more than 100 years, it was thought the Western Swamp Tortoise had gone extinct until it was rediscovered in 1953.

By the 1980s, it was estimated there were less than 30 individuals left in the wild, thankfully today, the population stands at just over 500 tortoises in the wild and in captivity.

Current Western Swamp Tortoise populations are found in two small swamp reserves in WA, but are facing habitat loss and predation from introduced species like foxes, cats, dog and pigs.

Adelaide Zoo and Monarto Safari Park work in partnership with Parks and Wildlife WA and Perth Zoo on the conservation program working to ensure a genetically viable population of Western Swamp Tortoises are released into the wild.

The first clutch of Western Swamp Tortoises arrived at Adelaide Zoo in 2003, and across both Adelaide and Monarto, Zoos SA has successfully reared more than 20 hatchlings. Eleven of these individuals have since returned to Perth to be released into the wild.