Steeped in more than 135 years of history, Zoos SA has long been established as an integral part of the South Australian community’s heritage and social history and is one of the state’s oldest conservation organisations.

The society officially commenced on 23 July 1878 at a meeting attended by prominent Adelaide citizens.   From the outset, the society has had a keen interest in the care and preservation of both native and exotic rare and endangered species.  The name chosen at the time was The Acclimatisation Society of South Australia.  It later became known as the SA Acclimatisation and Zoological Society and the government granted land for a zoological garden on six hectares obtained from the Botanic Gardens of Adelaide.  In 1882, the name changed again to SA Zoological and Acclimatisation Society.

In 1937, to celebrate the society’s Diamond Jubilee, King George VI granted the society a Royal Charter and with it came the right to use the prefix ‘Royal’.  At this time the opportunity was taken to remove ‘Acclimatisation’ and we became ‘The Royal Zoological Society of South Australia’.  While we officially retain this name we’re today more commonly known as Zoos SA.

As the purpose of zoos has revolutionalised over the years we now boast renowned breeding and conservation programs both in our zoos and in the wild.  Our mission to save species and connect people with nature is supported by over 30,000 members, making us one of the state’s largest member-based organisations.

Adelaide Zoo is Australia’s second oldest zoo and was opened to the public in 1883. The zoo retains many of its original buildings, garden design and features, some of which are state heritage listed places.

Just five years after the society’s establishment, Adelaide Zoo opened to the public on 23 May, 1883 by Sir William Robinson.  It was established at a time of great resurgence and interest in natural history and was modelled on the major European zoos of that time, particularly, Regents Park Zoo in London. 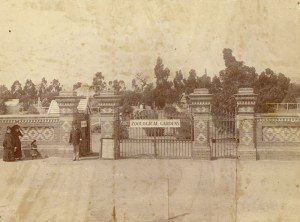 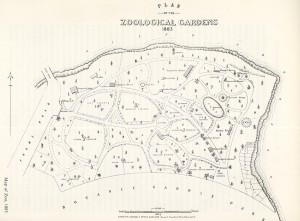 Adelaide Zoo is the second oldest zoo in Australia and proudly retains many original and significant architectural features.

The Elephant House: Built in 1900 and reflecting a uniquely ‘Victorian’ approach to housing zoo animals, namely in a building style symbolic of their place of origin. The ‘Indian-style’ temple is architecturally unique in South Australia. 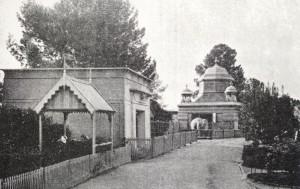 Hippo and Elephant House circa 1900.

Head Keeper’s Cottage: Built in 1883, the original keeper’s residence and one of the earliest structures at the zoo.

The original main gates and entrance walls: Built in 1883 and reflect a distinctive decorative masonry pattern typical of Victorian architecture.

The Rotunda: Built in 1884 and presented as a gift by Sir Thomas Elder. It is believed to be the largest of this kind in South Australia 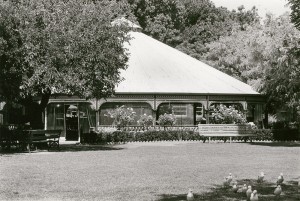 Minchin House: Built in 1887, it was the residence of the directors of Adelaide Zoo until the 1970s and now houses the society’s administration. The house was given its name in 2003 to honour the long association between the Minchin family and Adelaide Zoo. R E Minchin was the first Director of Adelaide Zoo (1882 to 1893). He was followed by his son and grandson.

The zoo is also a beautiful botanic garden with its magnificent landscaping a result of more than 130 years of care and attention. There are many significant exotic and Australian trees in the gardens, including a superb Moreton Bay Fig near Minchin House which was planted in 1877 even before the zoo’s establishment. 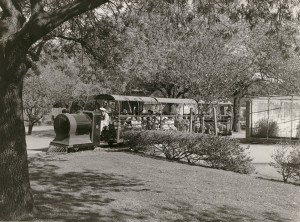 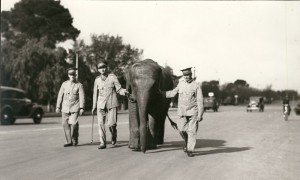 Lillian the elephant take her yearly walk to the Central Markets to be weighed, circa 1930s 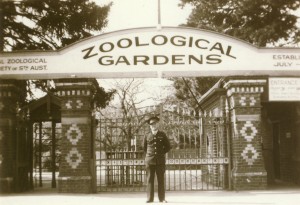 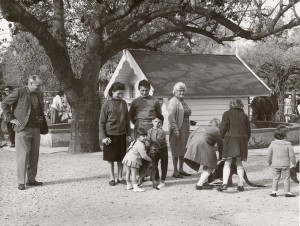 Through its modern redevelopments, such as the breathtaking panda home established in 2009, Adelaide Zoo leads the way in exhibit design.  However, some of its original animal enclosures, while not occupied, have remained to honour past eras and are a testament to the zoo’s evolution. The two most prominent examples are the Elephant House, and the Nile Hippopotamus House which features a motif on the front depicting the sun rising over the River Nile, flanked by two Egyptian geese.

Over its 136 years, Adelaide Zoo has celebrated a number of breeding successes for endangered species such as  the Orange-bellied Parrots, Western Swamp Tortoises, Brush-tailed Rock-wallaby and small primates including Golden Lion Tamarins and White-cheeked Gibbons.

Did you know: Australian comedian, writer and musician Tim Minchin is a descendent of R E Minchin.

Minchin House was the residence for over 50 years of the first three Adelaide Zoo Directors – Richard Earnest Minchin, Alfred Corker Minchin and Ronald Richard Luther Minchin. Each of the Minchin Directors contributed significantly to the development of Adelaide Zoo.

Richard E Minchin (1831-1893) originally became involved in the South Australian Acclimatization Society which lobbied to have a section of the Botanic Garden set aside as a zoological garden. This met with success in 1882 with land allocated near Albert Bridge, its present location. The Zoo opened in May 1883 and RE Minchin was appointed as the zoo’s first Director. He moved into the Director’s House five years later.

Ronald E Minchin had little formal training for a zoo director, however his good judgment in collecting specimens, architectural design and garden management contributed to the renown of the then named ‘Adelaide Zoological Gardens’.

Alfred Corker Minchin (1857-1934), was the son of R E Minchin. Alfred gained further zoological knowledge at the Melbourne Zoo.  Alfred Minchin became director of the Adelaide Zoological Gardens on the death of his father until his own death in 1934 – 40 years. A tall and imposing man, Alfred Minchin further developed the zoo, travelling to many places around the world and in Australia to add to the collection. The lemurs are said to have been his favourite animals.

Ronald Richard Luther Minchin (1904-1940) was born at the zoo and was educated at the Collegiate School of St Peter. In 1923 he joined the zoo’s staff becoming assistant director in 1929. Ron was a keen bird watcher and aviculturist, specialising in Australian parrots and breeding rare types. He introduced features in the aviaries that more closely replicated natural habitat which increased breeding success. Ron was director from 1935 until his early death at only 36.

Did you know: Sir Thomas Elder is notable for introducing camels to Australia, importing 120 from India in 1866.

A link with the establishment of South Australia….

Sir Thomas Elder (1818-1897) was a wealthy businessman, pastoralist, parliamentarian and philanthropist who contributed significantly to the early development of the colony of South Australia. Along with two brothers, Sir Thomas Elder set up the business operations and subsequent company that is now known as ‘Elders’, one of South Australia’s oldest companies. He funded several explorations to Central Australia and his philanthropy is very evident in South Australia, particularly at the University of Adelaide where his statue sits in front of the Elder Hall.

In addition to the Rotunda, Sir Thomas Elder donated animals to the zoo collection including Miss Siam, an Asian Elephant from Siam (now Thailand).

The cast iron work for the Sir Thomas Rotunda was fabricated locally by G.E. Fulton and Co., a company established in 1879. This company was responsible for the erection of all fencing in the city squares and most of the ironwork on the principal buildings in the colony. Sir Thomas Elder also donated the Elder Park Rotunda, which was made in Glasgow and completed on site in 1882.

In just over 30 years Monarto Safari Park has grown to become an international-standard conservation and zoological park and an iconic South Australian destination.

Following a feasibility study conducted in 1990, the decision was made to change Monarto from a special-purpose breeding area, closed to the public, to an international standard zoo. In October 1993, Monarto Safari Park was opened to the public. The opening ceremony was attended by 260 guests, who later enjoyed a safari bus tour of the zoo and bush band entertainment.

Two young female bison imported from Auckland Zoo were the first to arrive at Monarto. Some 150 animals were later transferred from Adelaide Zoo as well as another 40 animals which had been held on pasture at a Penola property. The transfer of Adelaide Zoo animals helped to ease overcrowding which was being experienced at the zoo at the time, and opened up opportunities to improve landscapes for animal enclosures. 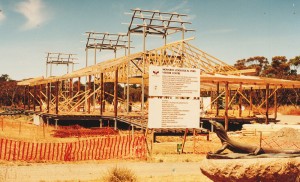 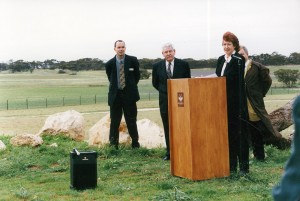 Monarto Safari Park’s advances in exhibit design continue to set high standards in the zoo industry and its newest addition, the chimp home, is the largest in Southern Hemisphere. The chimp platform was officially opened in 2008 by world renowned primatologist, Dr. Jane Goodall.

Today Monarto Safari Park is one of the world’s largest open range zoos covering 1,500 hectares and plays a major role in numerous breeding programs for both native and exotic species, many of which are also for rare and endangered species. In recent years Monarto has recorded great breeding successes with young Tasmanian Devils, lions, Cheetah, rhino, hyena and a baby Chimpanzee joining the expanding Monarto family.