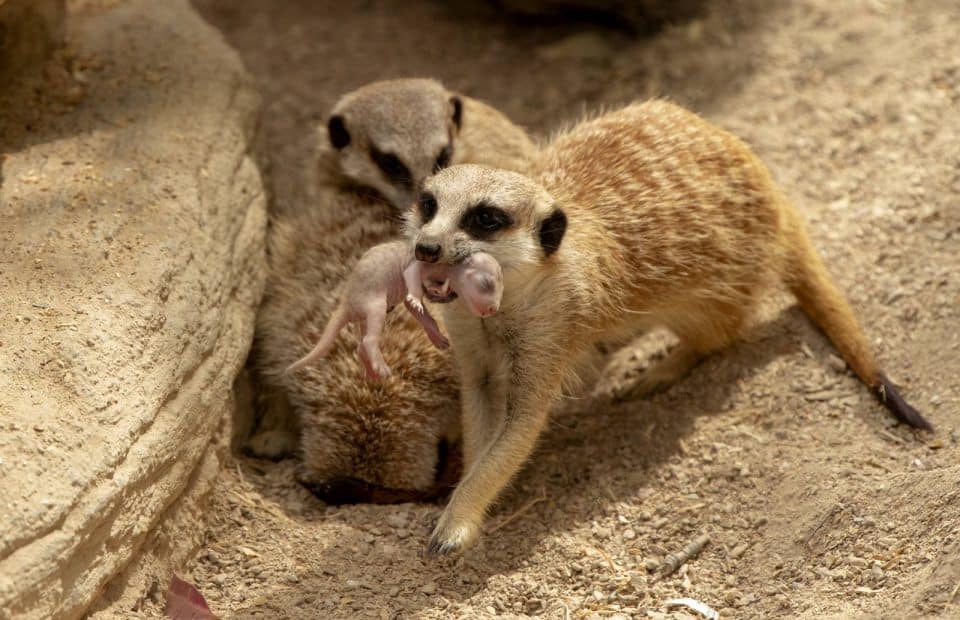 What’s better than one litter of newborn meerkat pups? Two litters, of course!

What’s better than one litter of newborn meerkat pups? Two litters, of course!

Zoos SA is in celebration mode thanks to the birth of nine little meerkat babies across both Adelaide Zoo and Monarto Safari Park.

Adelaide Zoo’s meerkat family has grown by five thanks to the adorable new litter birthed by parents Miney and Swazi.

The tiny pups were discovered on Saturday morning, October 27.

Lucky visitors have managed to catch glimpses of the young ones as their siblings and parents take them out of the den to enjoy the sunshine.

Adelaide Zoo meerkat keeper Matt Golebiowski said the new additions had been enthusiastically welcomed by the rest of the mob.

“We now have a nice, big family in this group and they are all getting along very well,” Matt said.

“Some of the younger siblings, born in the August litter, have taken on babysitting duties and were carrying the new pups out of the den and around the exhibit to explore.

“Now that these babies are about a month old they are starting to be a bit more adventurous on their own and coming out to enjoy some sunshine when the weather is nice.”

Sired by male Roho, the four-week old babies now have their eyes open and are beginning to explore their new home with the rest of the mob.

Visitors can see these adorable new additions at Monarto Safari Park during feed times, as the pups are beginning to take an interest in mealworms, fruits and vegetables.

Both litters will have their sex confirmed during a visit to the Animal Health Centre in the coming weeks, where they will also receive their microchips and an overall health examination.

Meerkats are native to southern Africa and can be found in the Kalahari Desert. They have adapted to living in very harsh conditions and climate, with little water, limited food and many predators