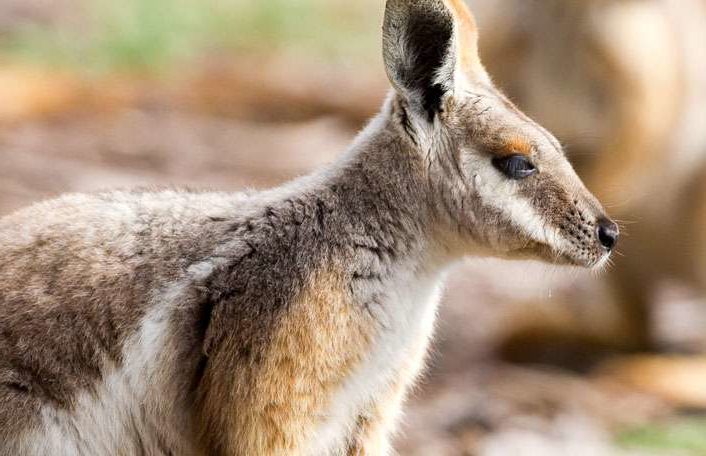 Two decades ago, Zoos SA embarked on a historic journey to bring the Yellow-footed Rock-wallaby back to the wilds of Australia.

Once wide-spread throughout the Flinders Ranges and even found through north-west New South Wales and south-west Queensland in the Grey Ranges, by the early 1900s, this iconic species was facing extinction in the wild.

Habitat loss, hunting by European settlers and the introduction of feral species including foxes, rabbits and goats led to a devastating decline in the wild Yellow-footed Rock-wallaby population, with several colonies becoming extinct.

This iconic species is now only found in a few isolated colonies within their former range and surviving populations are restricted to areas where threats are actively managed.

For more than two decades, Zoos SA, with the vital help of our supporters, has been dedicated to helping to prevent the decline of the Yellow-footed Rock-wallaby population through our captive breeding and re-introduction program.

This September marked the 20th anniversary of the reintroduction of Yellow-footed Rock-wallabies into Aroona Sanctuary near Leigh Creek in the north of South Australia. Located in the Flinders Ranges, Aroona Sanctuary is approximately 560km north of Adelaide.

One of South Australia’s most iconic arid landscapes, sadly in the 1980s, the area was badly degraded, overrun by feral species  and the local Yellow-footed Rock-wallaby population was extinct.

In 1985, more than 200 people from all walks of life combined forces to restore native habitat, and eradicate pest plants and feral animals.

In less than 10 years, the area had recovered to a point where it could once again support a diversity of life and was declared a Flora and Fauna Sanctuary by the Government of South Australia in 1995.

Zoos SA staff saw this as an opportunity to give Yellow-footed Rock-wallabies a second chance in their natural habitat.  In a world first for a macropod species, in 1996 twelve Zoos SA-bred wallabies were released into the sanctuary over a 12 month period.

Two decades on, the wallaby population is holding strong, with a stable population estimated at around 40 animals.

This project marked the first reintroduction of a macropod species and is one of the longest running native fauna reintroduction programs in Australia.

As a conservation charity, saving species is at the heart of what we do and successfully releasing an animal back into its natural habitat is our ultimate goal.

In the years since, many Zoos SA staff and partners have been involved in making the project the success it is today. We remain committed to this species and continue to work with our partners to protect this population.

The wallabies have been monitored every year since their reintroduction. Zoos SA staff, scientists and volunteers closely monitored the released wallabies by tracking the signals emitted by their radio collars, which allowed trackers to follow their movements and determine their survival rate.

Habitat destruction is still currently a threat to wild populations due to grazing by domestic stock and feral herbivores such as goats and rabbits.

Predation by foxes and feral cats is also an issue for the species. Zoos SA continues to ensure the long-term survival of these wallabies at Aroona by managing these threats through an ongoing feral animal control program.

Community support has been crucial to the success of this project with local pastoralists and landholders assisting in feral animal control.

This iconic species has a special place in the hearts of our Zoos SA family, with Yellow-footed Rock-wallabies calling Adelaide Zoo home since we first opened our gates to the public in 1883, and housed at Monarto Safari Park since 1988.

This remarkable wallaby has also been a cornerstone species for the conservation of other wallaby species.

Through cross-fostering programs, this species has helped increase numbers of the Brush-tailed Rock-wallaby in eastern Australia.

Recently, our Yellow-footed Rock-wallabies pioneered the first cross-foster of a Goodfellow Tree-Kangaroo, helping to save another species!

Several generations of Yellow-footed Rock-wallabies have been born in the wild since 1996, and with more than 85 different animals recorded at Aroona Sanctuary since the reintroduction, we are proud to say they are once again part of the landscape in the western Flinders Ranges.

Donate now to help save animals

Your support will provide the vital funds to allow us to continue our conservation work. Get involved today!